After over two decades of living in relative peace, Bogotanos are finally getting over their fear of each other and starting to figure out their identity as a city. The result is a gastronomic revival, a rising tourism industry, a booming nightlife and a thriving arts scene—all of which have begun to lift the city up from its cultural and geographical isolation and to make it, for the first time in many Colombians’ lifetime, a destination. So if you are into being at the right place at the right time, look no further than Bogota.

THINGS TO DO IN BOGOTÁ

THE SALT CATHEDRAL OF ZIPAQUIRÁ 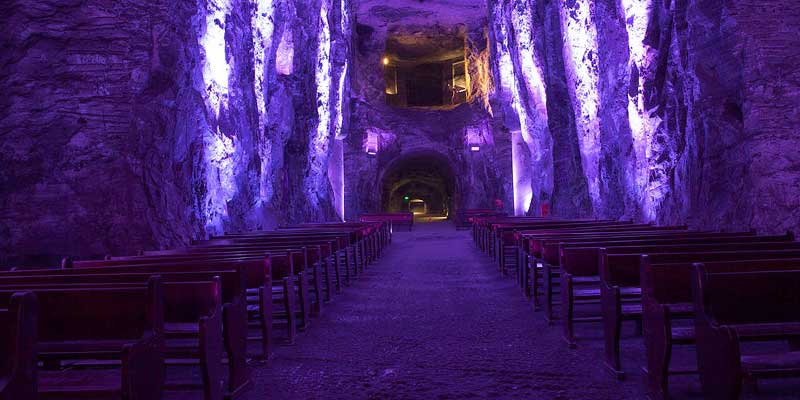 In 1810, Alexander Von Humboldt, a German scientist, led an expedition to explore the salt mines in the town of Zipaquirá, about 26 miles north of Bogotá. The purpose of Humboldt’s expedition was to help build the  ‘New Republic:” Colombia––then called Nueva Granada––had declared independence from Spain that year. The local indigenous community, the Muisca, had been working these mines since the 1600s, using the mineral for pots and fabrics. Humboldt modernized the mine’s excavation techniques, and in just a few years Zipaquirá became an important mining town. Over the years, the miners built a sanctuary inside the tunnels, where they prayed for protection from the saints before descending. Then they went one better, and carved a cathedral 220 yards down into the mine, which opened in 1953. In the early 90s it was shut down due to structural concerns, and a new one was constructed, 100 feet deeper than the original. The new cathedral opened in 1995, with a nave, dome, pews, and a capacity of 8,000.

To be clear, it’s not a cathedral made of salt. Nor is it technically a cathedral under Catholic law, because it doesn’t have a bishop. But it is a functioning church, with up to 3,000 people attending Sunday services, and it remains an important pilgrimage site for Colombians. The large, illuminated cross is a pretty impressive sight, and the cathedral is part of a larger salt theme-park, with a museum, zip-lining, and a climbing wall. 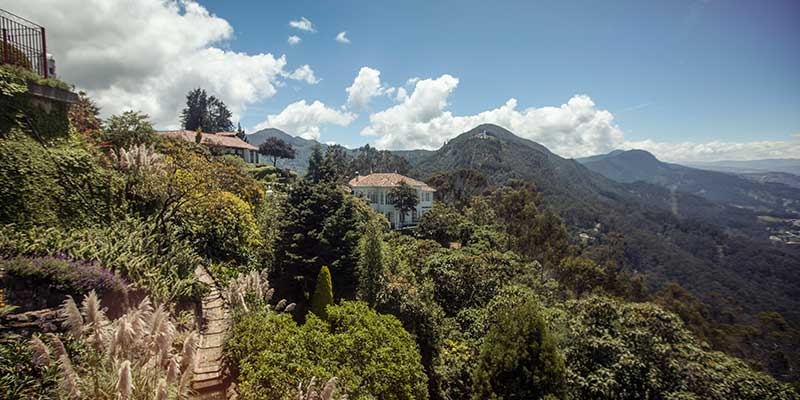 There are some great hikes in the “cerros orientales”, the eastern mountains that flank Bogotá). One of them is through Quebrada La Vieja, up the mountain near Calle 72, right in the heart of the city’s financial district. The hiking path is open weekdays from 5-10 a.m. and weekends from 5-8 a.m, but make sure it’s open before you head over there—sometimes the times are cut short to allow the mountain to recover.

If you’d like to support local environmental causes, connect with “Amigos de la montaña” (Friends of the Mountain), a group that organizes regular hikes throughout the whole eastern mountains. My favorites are the Las Delicias and Monserrate paths, and the wetlands of Córdoba, Santa María del Lago, and La Conejera. 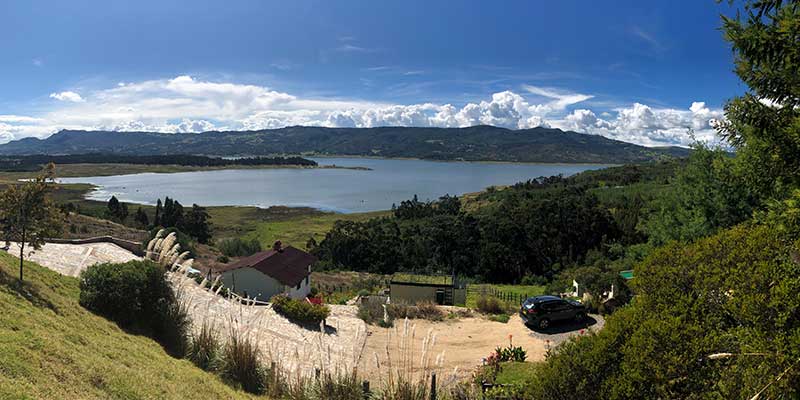 Before the Spanish conquest, Lake Guatavita was a sacred place, where the heir to the Muisca throne would go to pay tribute to the gods, covering himself in golden powder and circumnavigating the lake on a golden raft, casting offerings of great value into the water. This old Muisca ritual, historians believe, was the origin of the legend of El Dorado—a mythical lost city of immense wealth that drew hopeful European explorers to the region for centuries (and inspired some ill-fated attempts to drain the lake). 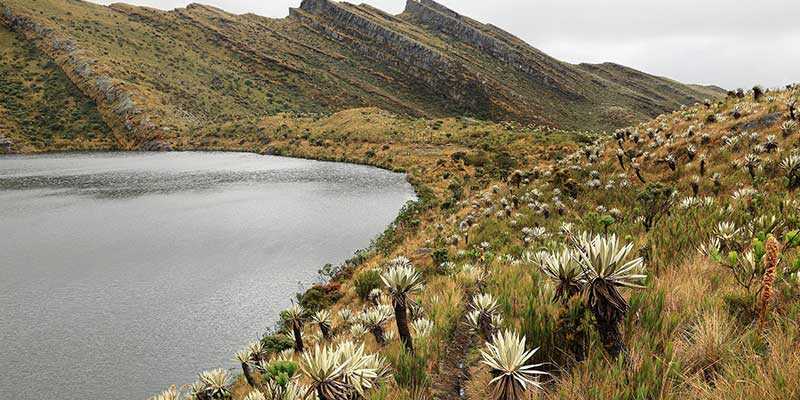 Sumapaz and Chingaza national parks, cover a big area of the surrounding Cundinamarca department. They are considered one of the largest and most diverse páramos (an ecosystem roughly equivalent to a moorland) in the world. There are countless lakes and the distinctive frailejón trees (which look, roughly, like a cross between a palm tree and agave plant), and it’s the source of many Colombian rivers, including the Tunjuelo, Ariari, Guapi, and Duda. But perhaps the best part is that it’s home to some of the most interesting animals in Colombia, including condors, eagles, reindeers and, best of all, the Andean bear (or “oso de anteojos”, which translates as “spectacled bear”).

8 THINGS TO KNOW BEFORE YOU GO TO BOGOTÁ 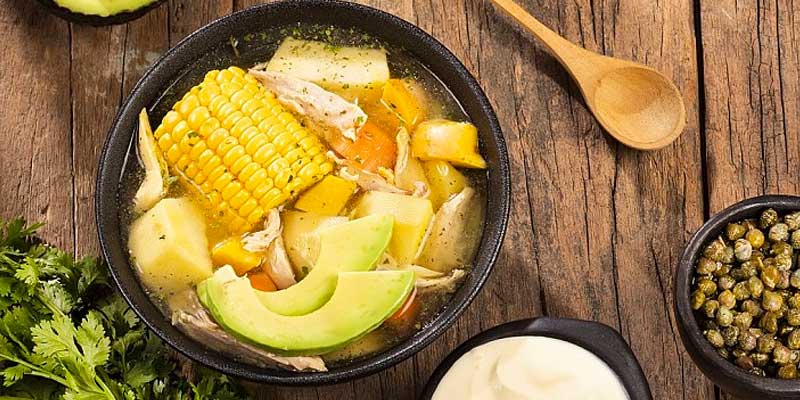 Weather in Colombia is not seasonal. It’s so close to the equator that every day is pretty much the same, and the weather is determined by altitude: the higher you go, the colder it gets. At 8,612 feet, Bogotá—which other Colombians like to call the Fridge—has mild daytime weather year-round, but it gets cool at night (around 48 degrees Fahrenheit). As a born-and-bred Bogotá native, whenever I’m back in the city I shift to jacket mode even when it’s sunny because the temperature can drop unexpectedly. Don’t make the tourist mistake of walking around in flip-flops.

Orient yourself with the mountains.

Bogotá is flanked by mountain ranges to its west and east. You can see one of them, the Eastern Andes, from most places in the city, so they’re a good way to orient yourself. Most Bogotanos use these mountains as a reference point, which is why most maps of the city have east at the top instead of north. It’s also why in Bogotá, subir (“go up”) means “going east” and bajar (“go down”) means “going west.”

A formidable soup made with chicken, no fewer than three kinds of potatoes, corn, and a local herb called guascas, ajiaco is Colombia’s national dish. What else goes in it is a matter of personal—or familial—preference. Some might add capers, cream, avocado or rice, while others might regard those ingredients as nothing short of sacrilegious. I’m in the pro-cream and avocado camp, but you do you. Explore your options; get a taste of ajiaco at La Puerta Falsa, at La Pola in Las Aguas, or at Las Cazuelas de la Abuela in Chapinero.