The colourful, colonial streets within Cartagena’s Walled City beckon you in with horse-drawn carriages, cobbled alleys and the vibrant Palenqueras selling fruit to travellers. Get your taste buds tingling with an exclusive rum tasting session or Caribbean cooking class before our guide unveils the history of the colonial mansions and plazas that reside here. Nestled on the coast, this Caribbean port is both the most popular tourist destination and the safest metropolis in Colombia, and with the beauty of its UNESCO-listed historic centre, the brightly coloured buildings, costumes and exotic fruits all glowing under the heat of the tropical sun, and the rhythmic cumbia melodies that echo through the streets, visitors feel an almost irresistible allure from arrival.

The Cartageños themselves have an infectious pride and passion for their city; perhaps no surprise when you consider the town survived six pirate assaults in 300 years, including the defence of the city by 2200 Spanish troops against a fleet of 33,000 soldiers on more than 150 ships. Today those brave passions are more likely manifested by the couples curled up in crevices and nooks along the ancient walls, lost in the romantic air of the city.

For newcomers the charm of Cartagena lies in wandering aimlessly, sweating your worries away in the humidity, sampling street food, sneaking smiles from the palenqueras (fruit ladies), and wistfully contemplating running away from your day job to a life on the Caribbean coast.

THINGS TO DO IN CARTAGENA

Cartagena’s character — its lush plazas, fruit vendors and street art — is contained in two small, impossibly photogenic neighborhoods: the walled Old City and the rising barrio Getsemaní. There, in the birthplace of Gabriel García Márquez’s magical realism, are the city’s most refined restaurants, its museums and balconies that spill over with flowering bougainvillea. But even in its most energetic quarters, Cartagena is not so much a place to do, as a place to be. We advise you to avoid the beaches near to the old city as normally they are overcrowded with vendors and locals. You’ll have plenty of beach time in your visit to Rosario Islands.

Explore the streets of Getsemaní 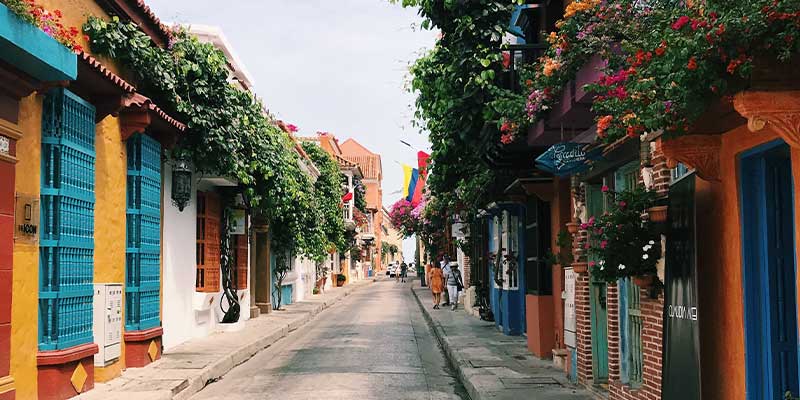 If something has drawn you toward Cartagena, then it’s likely to be a photo of one of its many, many, colourful streets.

Although there is no shortage of these dreamy kaleidoscopic calles and carreras within the Walled City (more on those later), we largely preferred those we found ten minutes walk away in and around the Getsemaní neighbourhood.

Once the grungy, gritty, salubrious part of old Cartagena, Getsemaní evolved into the hub for backpackers and curious travellers in the last decade. However, it was clear on our most recent visit that gentrification and wider tourism have now also arrived here in spades. Although homeless men still sleep in one section of the painted street off Plaza de Trinidad, which was unlit and avoided for years, that section is now also home to a cool Italian restaurant, cocktail bar, and visitors strolling to or from some of the various boutique hotels nearby.

So the invisible barrier between Getsemaní and the historic walled tourist centre of Cartagena is certainly now blurred to the extent that it no longer exists, and the pace of development is clear. Its punk spirit is fading quickly, being replaced by the modern and hipster-friendly aesthetic of new Cartagena within the crumbling, colourful colonial walls.

If you explore in the early morning or with an open mind off the main streets, you can still find moments and snapshots of the old Cartagena.

For after-dinner people-watching, head to the heart of Getsemaní, Plaza de la Trinidad, where kids kick soccer balls, hippies strum guitars and bohemian Argentines sip mate on the church steps. Emblematic of this fast-changing, formerly working-class neighborhood, Demente is a trendy tapas bar housed in what is supposedly the area’s oldest home. Opened last year by a Spanish-trained Bogotá native, the bar has wooden rocking chairs — several of which line the sidewalk — and Pop Art on the walls, including mirrors painted with silhouettes of Gandhi, Michael Jackson and Woody Woodpecker.

Wander around the streets of the Old City 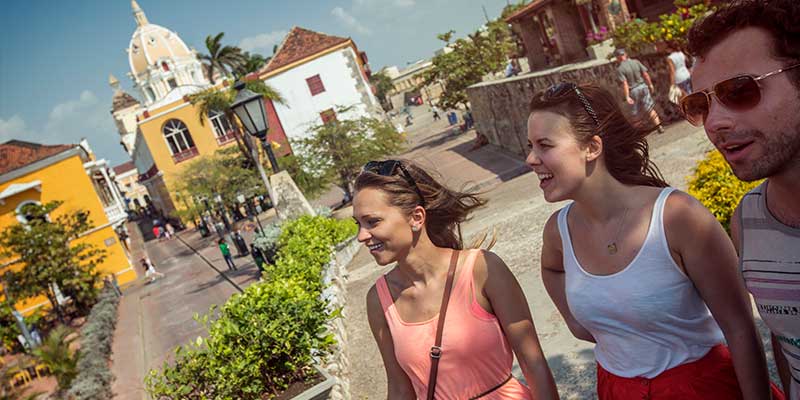 You will be amazed by all of the architecture and culture inside the Old City Walls.  Make sure to bring extra water and wear extra sun block for the scorching sun.  Try visiting the old city either early in the morning or in the afternoon to avoid overheating.  There are tons of churches and architecture to marvel at.

Cartagena could be the most visited city in all of South America if it was marketed correctly due to the old city.  The place is incredible and has a certain charm to it.  The only issue is the heat which is stifling. The following are some relevant places within the walls of the Old City:

Shop and enjoy art in what once were jail cells or storerooms for the fortresses.These 23 dungeons built in the late 1700s were built by the military during colonial times and then later used by Spanish for storage and eventually into a jail before becoming souvenir shops.

It’s impossible to miss this church while wandering through the streets of Cartagena. It’s the main church of the city and an excellent example of the colonial times when Cartagena’s high society gathered in this church every Sunday.

Santa Teresa Square and a stride above the Old Walls

Head to the Santa Teresa Square in the late afternoon. We recommend you to sit in the main plaza and enjoy the excellent drinks and food they prepare in the restaurant of the Santa Teresa Hotel. The Coconut Lemonade of this restaurant is one of the best drinks in the whole city. Afterwards you can climb to the Old Wall and enjoy the sunset besides the old cannons that protected the city from the pirates in the 17th century. 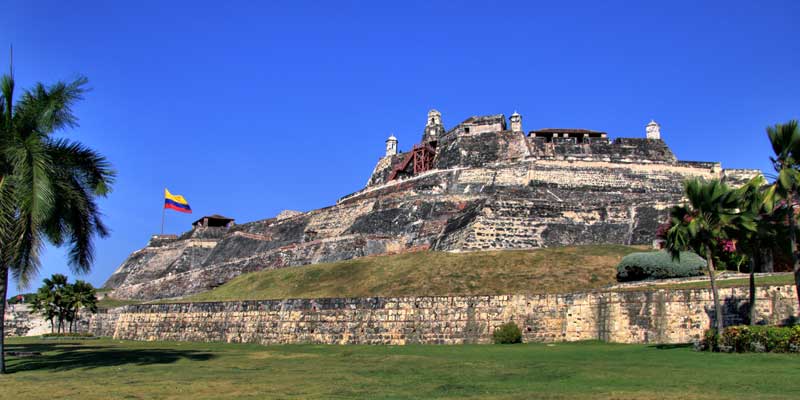 The massive castle fort was used as protection since the city used to be rich with minerals and often a target to thieves. Explore the tunnels inside and don’t forget to get a picture of the massive Colombian Flag at the top. 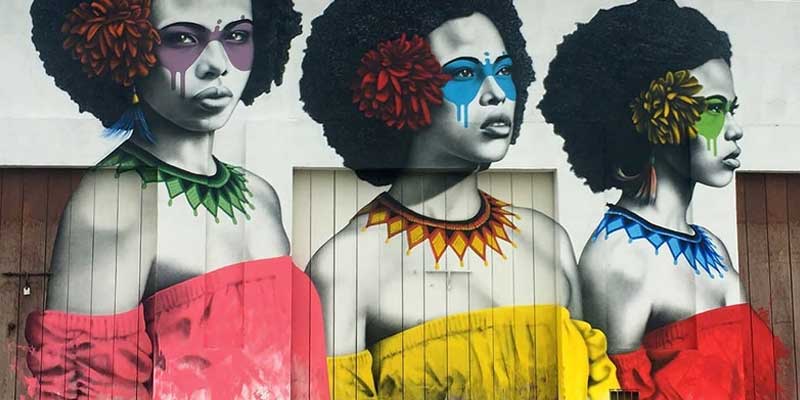 Colombia has actually become a bit of a mecca for graffiti artists, and though Bogota is the undisputed epicentre for this, Cartagena’s walls are home to some of our favourite works.

The Indian girl on the doorway, the beaming Afro-Colombian woman with streamers for hair, the masked group of children staring down at you with menace or glee. Many of these works will reveal themselves to you as you stroll around the street, and share stories indelibly linked to the story of the neighbourhoods, their most famous sons and daughters, and the city’s past and present. One piece however - “Las Tres Guerreras” (The Three Warriors) - is so hypnotic, towering, and well-executed, that you simply have to seek it out at the entrance to the Santuario Hostel. 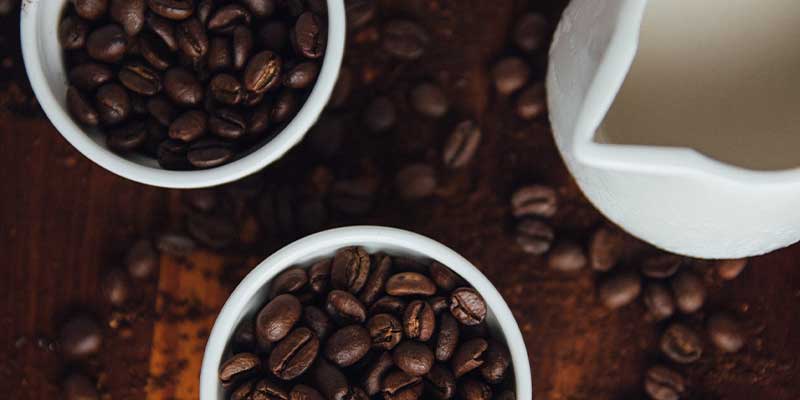 The best coffee in the world is from Colombia. Full stop, no arguments.

Its chocolate and caramel rich aromas are simply wonderful, and any visit to the country should involve a little bit of tasting its most famous export.

Juan Valdez is the Starbucks of Colombia and you’ll find a few of these in the Walled City, but your best bet to taste single-source beans from the regions and enjoy a good atmosphere are:

Folklore Cafe | A large cafe close to the Clock Tower, its walls explain coffee production in Colombia and you can taste seasonal single-origin beans from the key production areas in the country. Servce V60s and Chemex as well as standard espresso-based drinks.

Gato Negro | On the same street as Stepping Stone, it's got better single-source coffee (and a bloody wonderful cat).

Cafe Mural | Down the graffiti-heavy Calle San Juan side street in Getsemani, this small but lively coffee shop is actually only open to the public from 3 p.m. - 8 p.m. as they provide private coffee classes and tastings in the morning. A place for coffee lovers and those who want to learn about it.

Ábaco Libros y Café |  In contrast with much of Cartagena, this cafe and bookshop feels more like a Harry Potter hideaway.